The housing conditions survey is timely in light of these “stale” housing products resulting from the recession and the lack of investment in some properties stemming from housing affordability challenges. VCHR and czb found approximately 1,000 housing units in troubled condition, with 82 dilapidated structures. These structures are likely the residences of households that cannot afford to keep-up their property or who can only afford sub-standard housing. Units that are in “poor” condition are often associated with absentee landlords.


czb evaluated 19,259 residential exteriors on a 5-point scale to determine the approximate condition of various County neighborhoods. czb surveyed properties that were constructed prior to 2000 and have home values below $400K. See a map of homes surveyed here. Property condition scores reflect the level of investment in major areas of each home, including the porch, roof, siding, landscaping, and entryway of the surveyed property. czb matched the field data to other housing data assembled by VCHR and czb and further analyzed the scores to determine areas of relative strength and need in the county. Just over 90% of the 19,259 properties sampled in the driving Housing Conditions Study received a score of “2” or “3”, indicating that these homes were in average or above average condition. Approximately 1,000 houses sampled were in troubled condition (receiving scores of “4” or “5”). The highest concentrations of troubled properties were found in the northern and southern-most regions of the County. Learn more about field survey results here. 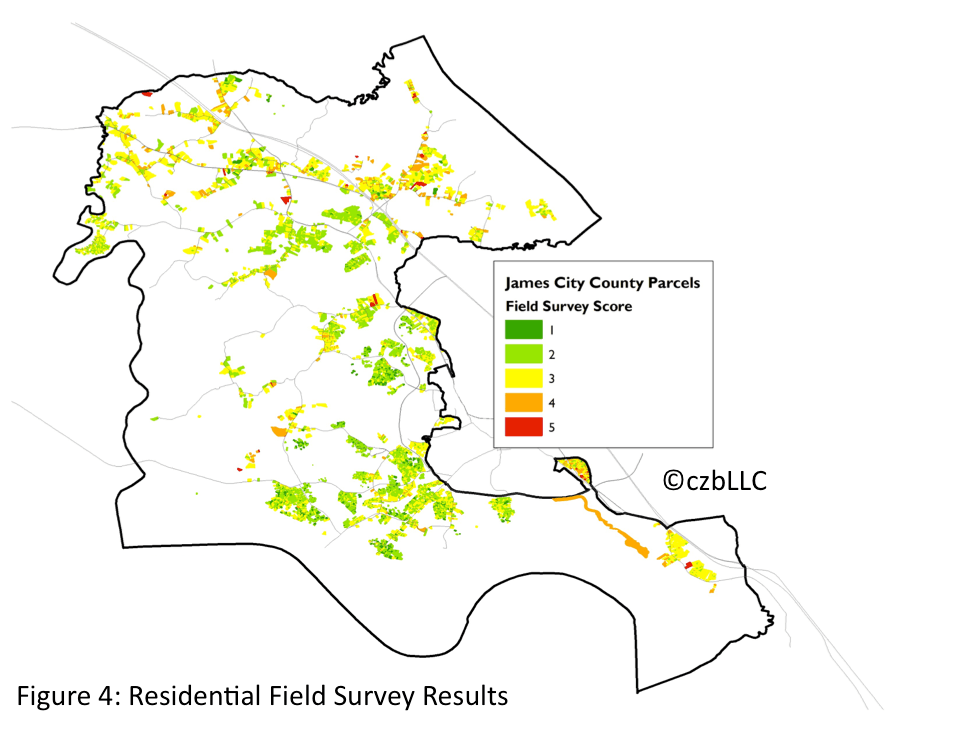 czb estimates that there are at least 82 dilapidated single-family residential structures built before 2000 in the County. Each will cost, on average, $50,000 to stabilize and bring to a habitable condition, though not necessarily readily marketable condition. There are another 864 distressed homes in poor but not uninhabitably bad conditions; these will all trend towards complete distress, creating a large inventory of blight that will have negative consequences for the County. These, like the 82 in the worst condition, are generally scattered, but they do exist in clusters. To prevent these properties from further degrading, and to inoculate nearby properties against decline, it is important to strategically factor in the location of these worsening, at-risk properties. In that context, there are 3,385 average quality single-family homes within 500 yards of these distressed properties. In these instances, proximity to blight reduces property values and undermines James City County’s long-term fiscal strength. It is strategically important to pay attention to these sites. Curing distressed properties near still-healthy properties should take priority. It will always cost less to take a “4” property to a “3” condition than to mitigate the distress once it degrades to a “5”, which 100% of these properties are on course to do. Intervening is also an opportunity to preserve a sizable volume of affordable stock that now exists, and generally – and favorably – is located in a mixed-income market context.

VCHR conducted five focus group sessions with James City County residents. A total of 44 James City County residents attended, 34 of whom were age 55 or older. Eight attendees were 36 to 54 and 3 attendees were under 36. The majority of attendees were interested in talking about aging-in-place and home maintenance. Learn more about attendees. VCHR faculty and graduate students asked focus group participants about their primary home maintenance concerns and the barriers they face in addressing those concerns. Many participants mentioned that they have a hard time keeping up with home maintenance in general and nearly everyone mentioned a number of pressing concerns. One of the most common concerns was insulation. Many of the participants recognized that air-sealing and insulation could make their homes more comfortable and more energy efficient, saving them money on their monthly utilities.

Other common concerns included issues with flooring and plumbing, especially bathroom plumbing. Most participants who identified plumbing issues mentioned that they had leaks that needed to be addressed and fixtures that needed to be replaced. Some participants mentioned more serious problems. For, example one attendee said that he/she had to cut off his/her water because of an unresolved plumbing issue. Several attendees said their floors were in disrepair and needed to be replaced.

Roof repair, drainage issues and concerns about trees were also common. The majority of participants who mentioned roof-related issues mentioned specific repairs they needed. A few participants mentioned that they were saving for a roof replacement. Some participants said they lived in low-lying homes on land with poor drainage and when there is heavy rain, flooding is very common. Finally, concerns about large trees were a very common issue. Participants explained that trees are very costly to cut down. One participant said that contractors can “gouge” County residents for tree removal because high wind events are common in the County. Another participant said that she was denied homeowner’s insurance because she could not afford to remove a tree that had been deemed a hazard. Residents of James Terrace all shared concerns about large, older trees falling on their property. Participants also mentioned that tree roots have grown into their water and sewer lines, causing major problems.

A few participants seemed to be dealing with potentially dangerous or hazardous conditions. Two participants mentioned that they use space heaters throughout their house as their main source of heating. Another person described their house as beyond repair. Others described moisture that creates constant problems with mold. Learn more about focus group results. The self-administered survey reflected more detailed concerns. VCHR asked respondents about conditions of their foundation, roof, gutters, flooring, indoor and outside walls, wiring, plumbing, doors and windows. Between 18 and 38 respondents in each category of questions (foundation, roof, gutters, wiring, etc.) indicated that their home needed at least minor repair in that category. VCHR also asked about dampness and humidity in the home. Twenty-six (26) respondents mentioned that their homes are humid in the summer, have interior condensation in the winter, and/or are uncomfortably dry conditions in the winter. More than half of respondents mentioned foundation problems (28), gutter problems (27), window-related problems (28), floor-related problems (32), inside wall related problems (32), and outside wall related problems (30). Minor cracks in the foundation and fogging in the windows were the most commonly reported problems. Problems with windows and outside walls were most numerous, 48 and 46 problems reported respectively. Problems with gutters were the most severe, with 19 respondents indicating that their gutters needed major repairs. Malfunctioning gutters can lead to other, more serious problems with water intrusion and foundations. Learn more about focus group results. Nearly every participant in the focus groups with maintenance or home modification concerns said that affordability was the primary barrier to addressing those concerns. Many mentioned specific costs that they faced. Several participants also mentioned that when they can do work themselves (without hiring a contractor), just the cost of materials can be a barrier to maintenance. One participant said that it’s hard to address home maintenance concerns even when one is not “bad off,” but still doesn’t make much money. She described herself as “just on the edge.” Finally, many participants mentioned their ability to find good or honest contractors as a barrier to addressing maintenance concerns or undertaking home modifications for aging in place. Many of the participants suggested that the County create a list of reliable contractors, especially for elderly residents who need assistance with home maintenance concerns. Read more about housing accessibility.