“Extremely-low income”, “very-low income”, “low income”, “moderate income” and “high income” are household income categories assigned by the U.S. Department for Housing and Urban Development (HUD). Household income categories are determined by the number of people in the home as well as the total household income. The more people residing in a household, the more income that household will need to earn to provide necessities like food, medical care, etc. to all the residents. For instance, using 2015 HUD income limits, a 1-person household making $39,700 per year is considered a “moderate-income” (earning 80% of AMI) household while a 3-person household making $31,950 per year is considered a “low-income” household. The majority of James City County households, 56%, are moderate-to-high income households. The remaining 44% of households are extremely-low, very-low, low, and moderate income households. A 4-person household making less than $56,000 is considered moderate-income, but the same household earning $70,900 per year is median-income. In order to purchase a median priced house in 2015, the household would need annual income between $75,000 and $99,000. 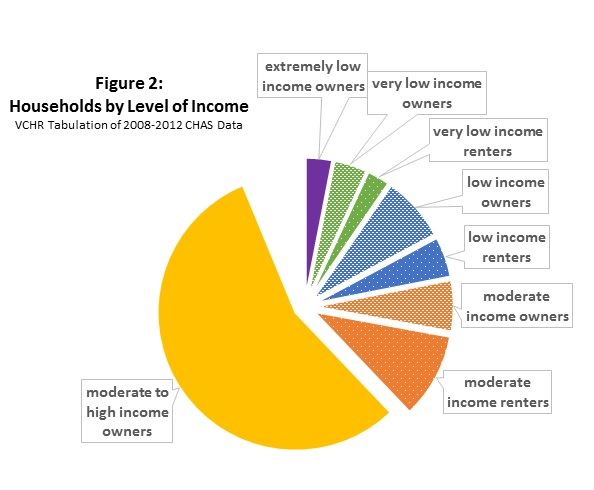 VCHR and cbz recommend that housing affordability be an important public policy concern for James City County. The purchasing power of highly paid workers and well situated retirees has driven up the average cost of housing and encouraged private sector development to focus on the more profitable end of the housing spectrum (exemplified by the County’s larger new homes built with higher levels of finish and on larger parcels of land). At the same time, there is little – in dollars or policies - to counter-balance these forces. Therefore, lower-cost units are currently in short supply in James City County. Moreover, the number of households with housing affordability challenges is becoming severe: more than 13,000 households (48%) are not in a position to buy a home in the County and more than 5,300 cannot afford to rent. Learn more about housing affordability in James City County.

For example, the staff at local hospitals are shown to have average annual salaries above $50,00013, will drive the creation of retail jobs selling groceries, hardware supplies, auto supplies, and housewares. The staffs of these retailers are likely earning far less than $50,000. While the typical hospital employee could purchase a home for $200,000 or more, the cashier at a fast food establishment or the stylist at national chain hair cutting salon who earn at the minimum wage will need an apartment for less than $900/month. If such an apartment only exists in the far reaches of the County or somewhere outside it, the cashier or barber will commute, congesting roads and adding to infrastructure costs, and contributing to development pressures on rural lands.

As another example, a local Senior independent and assisted living facility that houses up to 325 people may require and requires the work of roughly 200 more (to staff the library, manage the facility, clean the facility, maintain the grounds, prepare food, provide medical care, etc.) and, the vast majority of those staff will be paid an annual income between $15,080 (full-time at minimum wage) and $40,000. On average, this workforce will need rental apartments for under $1,000/month. The median gross rent (rent plus utilities) was estimated to be $1148/mo in the 2013 ACS, 1-year data. Without nearby housing in this price range, these workers will commute too. Read more about how housing can impact economic development.

Approximately 4,695 (30%) of James City County households are “cost burdened.”14 The U.S. Department of Housing and Urban Development (HUD) established the term “cost burdened” to describe households that need more affordable housing. HUD defines cost burdened households as “families who pay more than 30% of their income for housing… and may have difficulty affording necessities such as food, clothing, transportation and medical care.”15 Households that pay more than 50% of their income for housing are considered severely cost burdened and may face even harder choices between paying for housing and other necessities. Approximately 3,340 (13%) of all households in James City County pay more than 50% of their income for housing, with the remaining 1,355 (18%) households being more moderately cost burdened, paying between 30 and 50% of their income for housing.16 Learn more about cost-burdened households in James City County. A few focus-group participants addressed housing affordability head-on. They explained that they work in lower-wage jobs or have low, fixed incomes in retirement. Some participants explained that their wages are so low that they must rely on community groups for necessities like food and clothing. Many participants mentioned having to make choices between housing upkeep and other needs like car maintenance, loan and credit card payments, food, and medicine despite living modestly and doing their best to conserve. Review the conclusions drawn from focus groups here. Survey respondents also reported housing cost-burden. Ten of the 50 survey respondents said the they “frequently run short and have to borrow to pay other bills or sacrifice on other important family expenditures.” Thirteen other respondents reported that they “sometimes run short and have to postpone or reduce other family expenses.” Six respondents said that they have to sacrifice food at home or healthcare to pay their housing costs. Read more about the self-administered survey here. Needless to say, strained household budgets may be having health consequences for these families. Further, responses indicating the degree to which housing costs impact household finances correlated with higher stress among respondents. Read more about housing-related health issues.

A lack of affordable housing has direct consequences for the people and families who cannot affordably rent or own adequate and decent housing. A lack of affordable housing also has secondary consequences for the entire community including diminished quality of life and slower economic growth. James City County should address three of these secondary effects.
First, as noted above, having too little affordable housing to accommodate the local low-wage workforce translates into more commuting by these workers, which translates into higher infrastructure costs and lower quality of life for everyone. Livability in a beautiful coastal setting draws residents to James City County. Long-time and new residents value the bucolic setting, but not clogged roads impeding their capacity to run to the local pharmacy. Tourists, too, expect beauty, not thoroughfares congested with workers trying to get to and from work. When affordable housing is too scarce and too distant, rural character convenience and quality of life are threatened.

Second, commuting pressures not only breed traffic but generate additional triggers for sprawling development. Sprawling, low density development threatens to transform the County, jeopardizing a second key driver of James City County’s long-term County prosperity: a large supply of pristine land. Sprawling development also requires expensive new infrastructure, which can overly burden the public sector and local taxpayers. The current proffer system allocates the cost of direct impacts (traffic as adjacent intersections, for example) onto developers but does not address the less-direct impact caused by the type and location of developments (overall increased congestion by locating housing far away from jobs, for example). If the County does not adjust affordable housing incentives and land-use policy to address these less-direct impacts, the public sector will be left to pay for ensuing problems such as traffic congestion, lower property values, blight and stagnate economic growth.

Third, when lower-wage workers struggle to find high-quality affordable housing options, it becomes harder for employers to retain them, and even harder for employers to attract new workers. The competition for the best and brightest is stiff in every field at every level. When employers are unable to attract or rely on the workers they need, they will limit their expansion plans or decide to relocate entirely. Limited expansion means limited job growth to benefit residents and their families. If business cannot find workers and therefore cannot grow, they may leave James City County, resulting in a job loss.

To a certain degree, these outcomes are already evident in James City County. Sprawling development patterns in the County are widespread. The challenge this sprawling development poses is further compounded by new and additional factors. The Recession affected housing markets everywhere, including in James City County. Demand softened enough to create pockets of both “stale” housing - homes in disrepair or lacking adequate investment – and “stale” parcels that have been on the market or in need of redevelopment for a long time. These homes and sites can act as a drag on property values in certain areas of the County, currently and for years to come. Furthermore, the recession modified the retirement plans of many, somewhat curtailing the second home and retirement home markets. These changed plans mean that a number of already-entitled or by-right parcels may not be developed for the time being. The collective impact of thousands of entitled parcels with development potential shaped not with the knowledge we now have of the negative impacts of sprawl, but by the assumptions of an earlier era, may prove to be substantial.